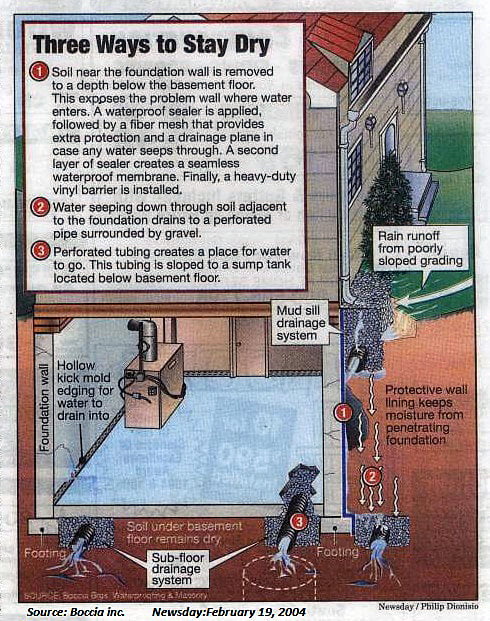 No sooner did I step through the doorway of the tool rental department at The Home Depot in South Setauket than the man behind the counter said: “If you’re looking for submersible pumps, we’re all out.”

This was a couple of weeks ago, when rainstorms and melting snow deposited water into many Long Island basements. Tool rental centers were deluged with customers looking to pump out their basements. “It was crazy here,” said Ed Mondini, owner of Gold Star Rental in Centereach. “Pumps were coming and going pretty quick. As fast as people returned them, we sent them out again.”

Perhaps my help- me look prompted the counterman’s assumption that I, too, was knee-deep in water. My trip to Home Depot only involved a search for kitchen cabinet hardware – the tool-rental section was nothing more than a shortcut.

My basement is dry – in fact, it has never flooded. Others aren’t so lucky.

For those homeowners seeing Noah in their nightmares, there’s hope. Portable submersible pumps, which can be rented for about $15 for eight hours, offer a temporary reprieve. Such pumps can remove water quickly – as much as 3,200 gallons an hour. That’s enough to flood a 12-by-12-foot room to nearly 3 feet. But obviously, these pumps are stopgap measures. Unless the source of the water is eliminated, the basement is sure to get wet again. 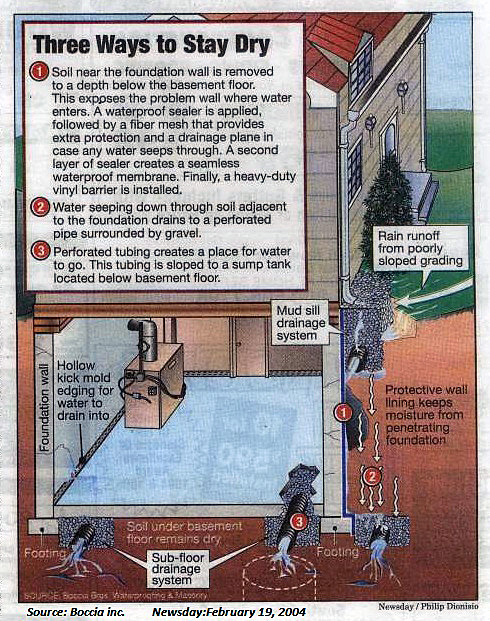 Keeping a basement dry during periods of heavy rain could be as simple as inspecting your roofing system: Roof water can leak because of old, cracked and missing shingles, or it can seep behind above-ground walls because of sagging gutters and missing downspouts. So much water can collect around the foundation that it leads to basement flooding. Basements also can get wet because of the grade around the foundation. Soil should be graded to slope away from foundation walls. But don’t build the slope so high that it covers the wall entirely; a minimum of 6 inches should be exposed.

Despite all these efforts, water can still invade. “Basements are not built to be waterproof, that’s really the bottom line,” says Vincent Boccia, one of the brothers in Boccia Brothers, a Garden City Park company that has handled basement water problems since 1955. One of the major factors, he says, is soil.

Foundations surrounded by clay soil are more likely to have leaks than those surrounded by sand or loamy soil. That’s because clay holds moisture, causing a pressure buildup. When this happens, water is forced into foundation cracks and joints by hydrostatic pressure. Sandy soil – like mine – or gravel-filled soil allows water to drain more freely, reducing the chance for hydrostatic pressure.

The long-term solution most likely is a professionally installed basement drainage system. Such systems are applied to the exterior of one wall or around the interior of the foundation wall where it meets the basement slab.

Waterproofing a single exterior foundation wall from the outside can be expensive – as much as $5,000 per wall. Soil must be excavated to expose the entire foundation wall. Then a waterproof coating is applied to the wall. A perforated pipe is placed in a bed of gravel at the bottom of the wall. Water collects in this pipe and is slowly dispersed into the soil, reducing hydrostatic pressure.

A more reliable process, Boccia says, is a subfloor drainage system, in which the section of the interior basement floor that butts up against the foundation wall is cut away. Soil is removed, then replaced with a perforated plastic pipe in an envelope of gravel. The pipe runs around the edge of the wall and floor to an automatic sump pump. Pipe and gravel are covered with concrete, so when hydrostatic pressure forces water through the foundation or slab, it is collected in the pipe, then drains to the sump pump. A subfloor system can cost between $3,000 and $5,000, depending on the size of your house.

If you’re building a new home, figure about half the cost. Many of the calls the Boccia Brothers fielded during the heavy rains earlier this month came from homeowners who were dealing with wet basements for the first time – but basements will flood in Long Island and Queens rather frequently.

“This is the first time in the six or seven years they’ve lived in their homes that they’ve had water,” Joe Boccia said.

It may not be the last time. Spring thaws could mean even more wet basements across Long Island.

Although he cannot always respond, Gary Dymski welcomes letters. Write to him in care of Newsday Home Work, 235 Pinelawn Rd., Melville, NY 11747- 4250 or e-mail [email protected] .com. Include your community of residence.